A new mural unveiled in central Auckland not only delights the eyes， it also cleans the air. Made with special paint， it can absorb air pollutants like a plant， which is almost equal to 182 trees or half a hectare of mature forest. 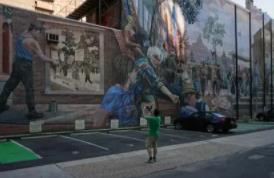 The mural was created with a unique pho-tocatalytic （光催化的） paint which allows it to absorb pollutants in the air. The paint uses sunlight to reduce harmful air pollutants， purifying the surrounding air， and the artwork is part of a global series of murals made with the paint. Well-known New Zealand urban artists Janine and Charles Williams created the artwork which is against a yellow and blue background on Karaka St， in Eden Terrace. According to Janine and Charles Williams， the mural， titled Te Karanga or The Call， was inspired by the legend of MoGAI56sCY0Hkgyx/zOhng==Māori ancestor Hape and connected the essence of staying true to yourself， embodying your roots and breaking down barriers.

Janine and Charles Williams have used their artistic abilities to transform bare concrete walls with their bright and colourful murals across New Zealand for years. Many of their works feature native birds which Charles Williams creates， while Janine Williams works on the backgrounds.

The mural is part of Converse City Forests， a series of murals around the globe that use ecological air-purifying paint to get rid of harm-ful substances such as CO2， formaldehyde（甲醛） and other gases， improving the air quality around the murals. Other cities involved include Warsaw， Santiago， Sydney， Manila， Mexico City， Jakarta， Chiang Mai and Rio de Janeiro.

What function makes the mural so marvelous？ （3 words）