Amit was truly very innocent and humble. He was as shy as a fawn. At some point he was invited over for dinner by his elder brother.

Amit left home after breakfast and made the long journey to a different village to meet his kith and kin.

After many months the brothers got together and sat right down to chat. They were having a good time, remembering old times.

"How are you doing Amit?" asked the brother.

Shy Amit looked down and softly replied, "Am doing fine brother. How are you doing?" 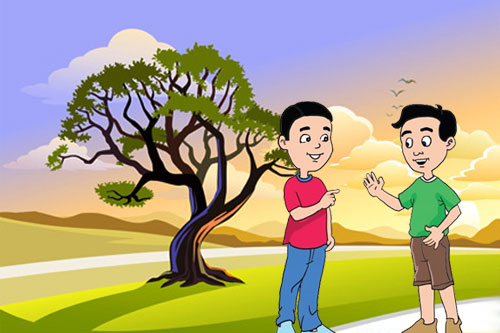 Their conversation was interrupted by Amit's sister-in-law who said, "Amit, would you wish a cup of tea?" Shy Amit was keen to have something. He really wanted to drink a cup of tea, but couldn't say a yes. Instead, he said, "No, thank you."

After a short time dinner was served. Amit's sister-in-law was a really good cook. She had prepared a delicious meal for Amit. His favourite paneer, gobhi and halwa, along with fragrant rice and sweetmeat.

Amit's mouth watered. He relished every bite of the dish served to him. He wanted a second helping, then he thought, "How do I ask for another helping? It would look so odd!"

Amit's sister-in-law in due course offered a second helping, but Amit was so shy that he couldn't ask for more, though he was dying to have more food. Soon, everyone took their second helping and finished their meal. With half empty stomach, Amit made the long journey back home.

Moral: Never be so shy that you do not ask for what you need.

下一篇：英语故事The Dog at the Well